Everything You need to know about us

Thank You for visiting this About Us page!

We are pleased that You are interested in knowing what is behind the scene!

How it all started?

Back in time around the year 2012 we have been in Bulgaria. It was approximately sixth vacation in there. We realized that Rose Cosmetics is literally everywhere around! We began finding more and more about Bulgaria, its tradition and cosmetics as well.

There is also one month lasting festival of Roses during rose picking season!

All these beautiful and interesting facts convinced us to start selling Cosmetics of Rose abroad. Initially it was only in Czech Republic back in 2014. Then we started in Slovakia, Germany and Austria in 2016. Then finally rest of Europe and UK in 2017. In the meantime, we successfully shipped over few thousands packages to our dear customers.

Who stands behind this store?

Thanks, it's me, my name is Martin Janota. 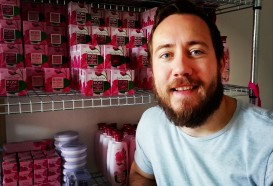 Privacy preferences
We use cookies to enhance your visit of this website, analyze its performance and collect data about its usage. We may use third-party tools and services to do so and collected data may get transmitted to partners in the EU, USA or other countries. By clicking on 'Accept all cookies' you declare your consent with this processing. You may find detailed information or adjust your preferences below.